Bespin refugee - March 24, 2011
In addition to their line of Star Wars greeting cards, party favors, and Keepsake Ornaments, Hallmark Gold Crown stores will soon offer a line of exclusive gifts celebrating the characters and quotes from the movies. Starting in April, the line will include glassware and mugs, coffee mugs, picture frames, items w/ sound, and more, available in limited quantities (while supplies last), with prices ranging from $5.95 to $16.95.
(Source: StarWars.com) 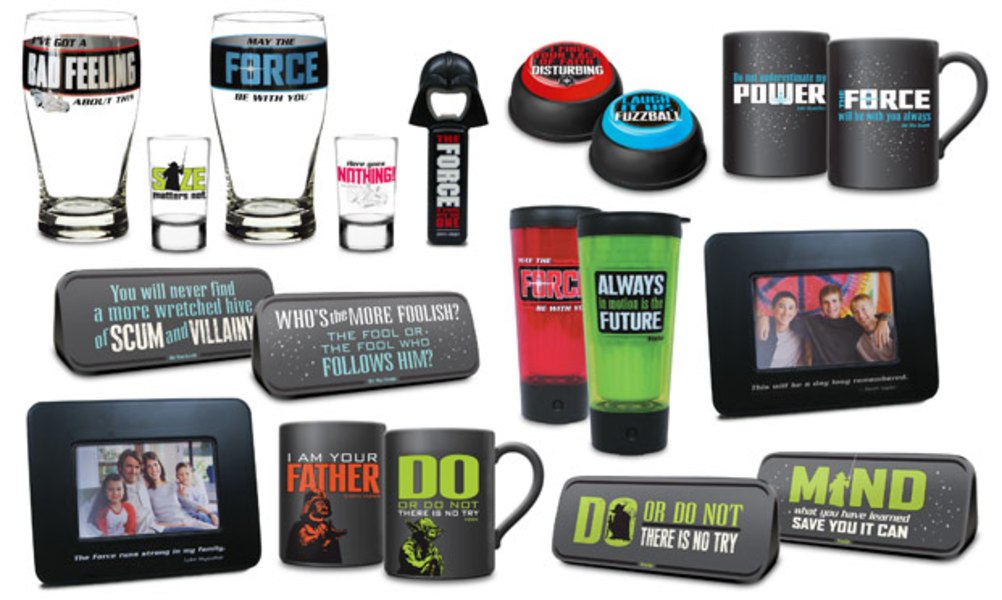 I hear ya brother! I know exactly how you feel.

I should add a footnote here, explaining that MOST of my problems in my marriage(s) did not involve anything to do with my "hobby" or the interests I have in collecting action figure toys like G.I.Joe. I didn't want THAT to become something of the crutch to what we're all leaning on as to why us collectors might all seem to have problems in our personal relationships with women (or others). There was no arguing or fighting about it and no teasing or ridicule towards me over it, as it's something I share right off the get go, so marriage would have NEVER come about in the first place had there been hidden issues over it. All that part of it was cool.

If ANYTHING....the amount of time I spend on the computer caused a great deal of aggravation in my last relationship, but that involves more than just being here at TNI, chatting about Joes. I use the Internet like a library and my interest in music and movies and politics just adds to the time spent on it. Even that wasn't the deal breaker though, as we all have our issues and hangups, insecurities and whatnot, life's on and off again problems, complacencies set in, boredom, stress, bills, jobs and everything else besides just personal hobbies of which we ALL should really have anyway.

My big thing (after seperating from my wife) was just getting involved with the wrong person at the wrong time in my life, when I should have been doing what I'm doing NOW...and taking timeout to regroup, refocus and be a little selfish with myself and figure some things out on a more personal level, before jumping into something like a serious longterm relationship right out of a dissolving 16 year one. BAD..bad move! Probably a "mid-life crisis" as they call it, but that's about it.

now and then reading whats going on..

i class my self lucky i been with my wife for 15 years married 11yrs..we have 2 kids

still allowed to collect my hobbie she helps me out big time..

it a shame this day and age lots of marriage go downhill..

glad you are back on to collecting joes ..

Wow! How much of THAT stuff was true?! The guy who wrote that 'color code' list must have (had) a life similar to mine! LOL

I guess I've been semi-fortunate that I have been able to avoid (ignore, actually) that kind of relationship drama for the most part by acting just as mature as the women I've split with (meaning, in one case anyway, I changed the locks on her and threw all of HER $hit out in the yard! {Yes, I've actually done that}).

Sorry to hear about of the tribulations you guys are going or have been through, though. Even as casual as you try to let things resolve themselves, it's never a totally smooth transistion.

Been with my girl going on 9 or so years, told he I didn'y believe in marriage when we 1st started dating, things are going fine, and I still have a toy room/office! There'shope guys, jut don't get married!

Will Have to look into myspace Female G.I.Joe thing. My space has help we deal with allot of things. Meeting old friend lost relatives ect. I said once if Myspace can help me meet the woman of my dreams I will get married on My space. LOL.

I am kinda sorry if this post was kinda personel yet stands to the truth once a Joe fan no matter what happens in life always A Joe fan. Yojoe!

Hey Agrevane, glad to see you back man. I'm very sorry to hear of your troubles. If it means anything I'll be praying for ya bud...

I keep flip-flopping on whether or not I'll ever collect Joes again. I may eventually. I found a VAMP today but I was broke so I had to pass it up.

And VH, I was only vaguely aware of your situation. Just hang in there bud. I think you're a good man and you'll make it just fine.

Concerning wives and all that stuff, my own wife has been wonderful concerning my hobby. Just to give you an example, back in 2006 I planned on going to Botcon that year; I had never been and it was gonna be in Lexington KY, which is relatively close to where I live. But come time to go that Friday night, I got a virus or food poisoning or something...I still think it was the sickest I had ever been before or since. And we kinda went back and forth over whether or not we'd go. (I briefly considered going to the emergency room it got so bad...) We had booked a room months in advance and I had been so excited. So it was gonna be a huge disappointment if we didn't get to go. But in the end my wife offered to drive me all the way to Lexington since I was so sick and wanted to go so bad. And that was a big deal since she's never confortable driving long distances. It was just a really wonderful gesture. (She did drive me there, and even the restaurant signs along the interstate made me nauseous!) (lol) She even buys me stuff from time to time. She's really great.

HAHA!! @loll@ Every American woman should read that at least once, whether any of it applies to them or not.

Shawn just told me about this thread so I thought Id chime in. I was married to a woman who didnt care for me spending the amount I did on toys but she let. Eventually we divorced and now get along fine. Just remember everything doesnt have to be horrible in divorce.

Since then Ive met a wonderful woman named chuck. Shes really cool. She can even pee standing up.

Seriously her names Kristin and she wasnt sure what to think about my collection at first but got a little involved and now loves it. There are women out there that can be cool with you collecting and even join in. Just keep your eyes open and search "female, your city, GIJoe" on myspace and see what comes up.